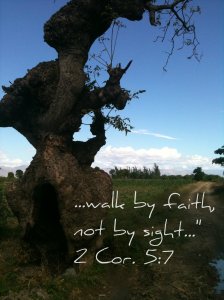 “Are you saved?” We hear that term a lot in Protestant churches. Personally when I heard it myself as a kid I knew I wanted it. Whatever “being saved” was, I needed it. In Acts, the apostle Peter describes this process, we have come to know as salvation:

Repent and be baptized, every one of you, in the name of Jesus Christ for the forgiveness of your sins. And you will receive the gift of the Holy Spirit. The promise is for you and your children and for all who are far off – for all whom the Lord our God will call.

Look closer at those two words “repentance”, and “baptism”. I’m going to give you the description of both of those words and I want you to think about them. Are they more than a prayer?

I am not ashamed of the Gospel, because it is the power of God for the salvation of everyone who believes; first for the Jew, then for the Gentile, for in the Gospel a righteousness from God is revealed, a righteousness that is by faith from first to last, just as it is written. The righteous will live by faith.

He spoke of being unashamed. I love that word, “unashamed”. If you’re really all about Jesus, people are probably going to know it. Because you’re probably not afraid to show it. There’s this chick that is trying to stand for her faith, Kim Davis, in a case of homosexual marriage and her duties as a clerk court. She’s trying to say I’m not ashamed of my faith and what I believe. I’m unashamed of Christ. Now whether or not you agree with her, (yes, she’s been married quite a few times – but that happened before she became a follower of Jesus) you have to admit, she’s really trying to stand up for her faith. It’s kind of inspiring. Just this week a Muslim airline stewardess was fired for not serving alcohol aboard a flight. She too, claims she was standing up for her religious beliefs. I don’t know about you, but I like knowing there are people out there who still stand up for what they believe is right.

Being unashamed of Christ, of your faith in Him, might require more than a prayer you know? It might require jail time, or a fine, or a business loss, or lost friendships and popularity and in a country other than America it might mean you will lose your life. Saying, “I’m following Jesus now”, and publicly being baptized could bring your earthly death. It’s not all peaches and creme. Yet for some reason people in the Church like us to think it’s just a simple prayer, just come down to the altar and “get saved”. Well, there’s a bit more to it than that. Don’t think I’m against altar calls, in fact I think we should have them every Sunday, Monday, Tuesday, (you get the idea) and it’s unfortunate when a preacher or teacher dismisses that opportunity, some people are desperate to come up and bend their knees before God – myself included. But choosing to follow Jesus isn’t just a quick prayer, it’s like a diamond with endless facets, it’s bigger and deeper than a slam, bam, thank you ma’am kind of thing!

It’s life altering, it’s an adventure you wouldn’t even dream of. And sometimes it’s downright hard to deal with – and it’s good we also share that message when we share the sinner’s prayer. Just listen to what Paul went through:

3 times I was beaten with rods

1 time I was stoned

3 times I was shipwrecked

A night and a day I was adrift at sea

Being a Christian, being “saved” isn’t for the wimpy person, it’s not for the faint of heart. It’s for those who are choosing a hard walk in life but we do it because one day this life will end and we want to spend the next life with Jesus, worshiping Him. We repent and turn away from our sin, we live differently because Jesus is with us, His Holy Spirit guides us.

I don’t know what you think, or where you are with all this, maybe it’s hogwash to you right now but I am familiar with that empty feeling you get and you don’t know why you have it, or how to get rid of it. And that feeling of “what am I here for” and “why do I exist”. My life is a living example of what happens when we turn away from sin and turn to Jesus. My healing and behaviors didn’t change over night, well some, but most have taken a little time. God doesn’t microwave people usually. Because of Him I am set free from so many chains, so much brokenness and shame and deep sadness!

If you’ve got that desperation in your heart to know if He’s real, just ask Him, start a conversation with Him. Go sit out under the sun somewhere, or somewhere you can see the amazing things of this earth, creation, and look up and ask Him, “Are You real God?” “Do You want to know me”? Read some of the Bible, look at who Jesus was. Start asking questions. God’s not afraid of those, in fact lots of people in the Bible even ask, “Why?”

There’s one more part to that verse up there on salvation, it’s that of being called. If you’re reading this, it’s highly likely that God is calling to you. You might be able to look back and see Him pulling at your heart in all kinds of places. I remember sitting in a bathroom all high on drugs and feeling God knocking on the door of my heart. I begged Him to let me live. There were several times like that with drugs, begging God for my next breath. How thankful I am that I get to sit here and type this message to you today! I believe He saved me, even for such a purpose.

Trust God today, He’s got an adventure for you too. And it may not always be easy but I can promise it’s worth the cost.